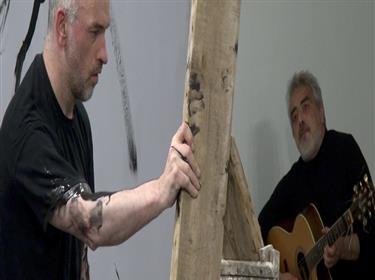 
"Sisyphus is condemned to live the same punishment day after day endlessly. No choice, no chance of escape. The more absurd the punishment, the greater the necessity to find a way to live it well." Thibault Delferiere

According to the Greek myth, Sisyphus is condemned to roll a rock up to the top of a mountain, only to have the rock roll back down again every time he reaches the top. Belgian performance artist Thibault Delferiere uses his body, paint and objects to confront the inevitability of repetition in a world premiere performance, exploring how the futility of Sisyphus' punishment relates to the daily challenges of life with a unique body.

Controlled physicality and masterful command are hallmarks of this performance piece created in a New Perspectives' collaboration with one of Europe's most distinctive disabled performance artists, with live improvisation from Sicilian guitarist Giuseppe Lomeo.

Over the past 20 years Thibault Delferiere has presented over sixty performances and collaborations worldwide. Following the 2017 premiere at Nottingham's Surface Gallery, New Perspectives presented Sisyphus at Birmingham's Be Festival where is won the Mess Award and is invited to perform in the Sarajevo International Festival - watch this space!

Target audience age: 16+
Running time: Aprrox. 60mins - including Q & A about the making of the piece
Interval length: mins