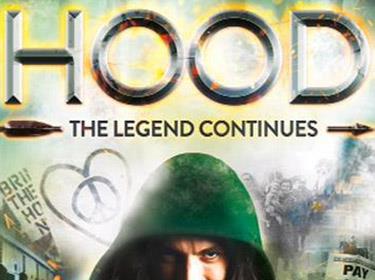 Cast: (L-R) Ewen MacIntosh, Adam Morris, Jonah Russell, Jasmine Blackborow, Alex Bedward, and Ed Thorpe
REBEL, OUTLAW, MAN OF THE PEOPLE
The adventures of Robin Hood are well known throughout the world and have inspired our storytellers, painters, playwrights and authors across the centuries. Now in 2015, we are collaborating with the Theatre Royal Nottingham, bringing a new set of tales to the stage, retelling this age-old legend afresh to celebrate the theatre's 150th anniversary.
We are thrilled to announce our cast - and for half, this marks a welcome return to their home ground of the East Midlands. Jonah Russell will play Robin, joined on stage by fellow Nottingham-born actor Ed Thorpe as Alan A Dale and Derby-born actor Alex Bedward as Scarlett. New talent Jasmine Blackborow has scooped the role of Marion with familiar faces Ewen MacIntosh, best known as Keith in The Office playing Little John alongside Genie in the House star Adam Morris, otherwise known as Robin Hood in the much-loved children's TV series, Maid Marian and her Merry Men, casting off the green hat in the role of Sheriff.
We invite you to join Nottingham's most famous folklore hero on a journey through a century and a half of Nottingham's vibrant and colourful history - from robbing the rich on a Victorian steam train right up to disturbing the peace of present day Sherwood Forest.
In this exciting collaboration with the Theatre Royal Nottingham, we have assembled a group of the region's leading playwrights join forces to create a series of new tales, each with their own unique take on the man behind the legend: outlaw, agitator, lover, activist, hero and global brand.
Tickets from Theatre Royal Nottingham Box Office (9am - 8.30pm) on 0115 989 5555
or BOOK ONLINE
Target audience age: 12+
Running time: 120 mins approx
Interval length: 15 mins