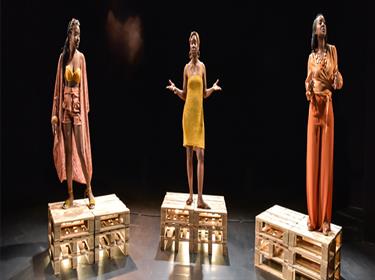 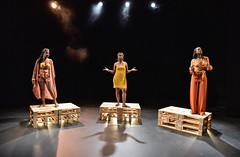 
Photography by Robert day
Welcome to the Caribbean. Where the sun is hot and the living is uneasy.
Meet three women. An unlikely trio. Different ages, backgrounds and attitudes. Each has a unique relationship with the island. A home. A regular holiday haunt. A first time visit. Through language that fizzes and sparks, we begin to discover that they share one surprising thing in common as the women come to terms with the transactions that define who they are.
"debbie tucker green has to be one of our greatest living playwrights. These words are electric" Director Jack McNamara
trade was first performed in 2005 by the Royal Shakespeare Company. New Perspectives brings debbie tucker green's distinctive voice to a regional audience, in association with the Brewery Arts Centre, Kendal.

The production contained strong language and after opening at the Brewery Arts Centre Kendal on 25 September continued to tour extensively across the Midlands, to Leeds, London, Oxford, and Hertford, with a final performance in Luton on Saturday 19 October 2019.
Target audience age: 15yrs +